Not all private jets have extravagant interiors as they are not large enough to accommodate anything more than leather reclining seats, small galleys and couches that can be transformed into beds. However the choice of color scheme and additional features like DVD players and television entertainment screens are all given special consideration. The carpets in private jets are usually hand woven or one of a kind. Some are silk and others are wool. Eurocopter EC135 which is a helicopter owned by Hermes designed by the French Fashion House featured brown calf leather seating and a white canvas cockpit. Versace has a completely black and white themed aircraft with elegance and style and most certainly making a bold statement.

When you look at the larger Boeing Business Jets and other VIP configured airliners like the Airbus this is when the elite big men come out to show how unique and powerful they can make their aircraft and especially in the Middle East. Some of these aircrafts are like hotels and the only limitations to what you can place inside is pretty much dependent upon physics. Each item must still pass rigorous safety checks and remain light enough to keep fuel consumption under control. The aircrafts are parked up in completion centers and this is where the customization takes place. The largest privately owned private jet is the Airbus 380, originally purchased by Prince Alwaleed from Saudi Arabia. Some of the requests which were made for this aircraft included a garage at the rear of the Super Jet to allow guests to drive directly onto the aircraft and exit onto the red carpet. A lift that would operate between three floors with a small concert hall complete with a baby piano. A Turkish bath crafted from marble thin enough not to add excessive weight to the aircraft. A well being room with a floor that contains a large screen showing exactly where the aircraft is flying over. A board room in the center featuring an outsized itouch screen and projector that beams share prices on the table. Despite all of these lush original plans this ‘Flying Palace’ as it was known was soldbefore its final delivery so the interior that was planned was never completed but it certainly was impressive. 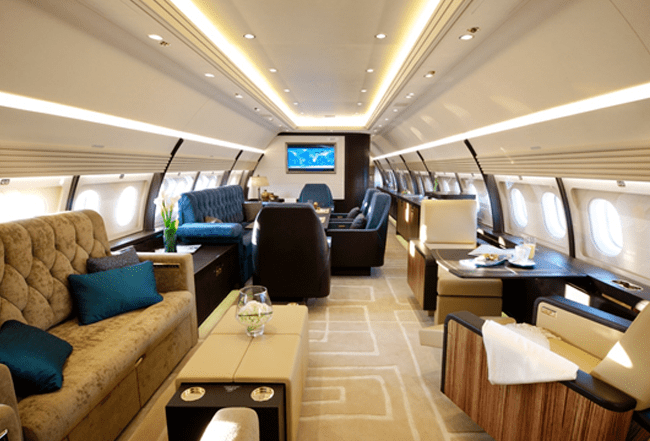 Some of the other aircrafts owned by the mega rich and heads of states can be fitted with everything from jacuzzis, cinemas, built in gymnasiums, cocktail bars and fully serviced, comprehensive kitchens. Large private bedrooms with double beds and ensuite bathrooms fitted with showers are common on these VIP airliners. Large Middle Eastern families will take these private jets so that they can congregate in the elaborate dining areas to share an Arabic buffet of delights or relax in the lounge areas for intimate and comfortable together time.

The future of private jet interiors knows no boundaries as technicon designs new concept Ixion shows in its recent article. The aim of this concept is to replace the entire cabin with screens that display anything that is desired including panoramic views of the environment around the airplane. This is aimed at creating an immersive experience that has never been seen before, also displaying the environment of the passenger’s choice whether it be the tranquility of the beach, peaceful forest and mountain settings to the stars of any hemisphere around the world. 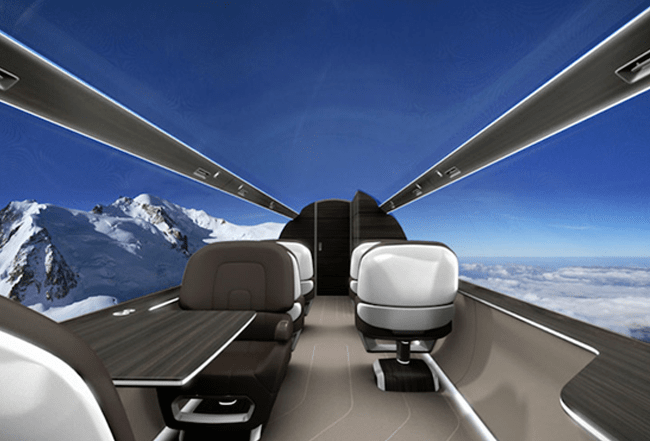 Whatever the current or future direction of private jet interiors takes it is clear that although first class may be comfortable it will never compare to the glamourous, sensational and futuristic interiors of a private jet. It could almost be compared to travelling in your own home.